Petras Klimas (1891-1969) was a lawyer, historian, publicist, editor, lecturer at the Higher Education courses and the University of Lithuania, diplomat, deputy foreign minister, signatory of the Act of 16 February.

The exhibition presents the most important facts of the signatory’s work and life, illustrated with books and photographs. According to the books from Library’s inventory, most of the photographs of Klimas’s family or relatives were obtained in 1936 from the Vaižgantas Museum, a few photographs were obtained from the Spindulys Printing House, and the rest of the photographs were either gifted by Algirdas Puida or by an unnamed person. The books written by the signatory or gifted to him were acquired in the Library in 1925-1938. They came from various sources: from Juozas Tumas-Vaižgantas, the Vaižgantas Museum, the Ministry of Foreign Affairs, and others.

If a person did not know their own past, or that of their own society, they would be like an infant. They can work and live actively on their own, only when they first become acquainted with the past from which they came from.

(Klimas, P. (1921). Objectives and paths of the study of the past. Our Past: Collecting Lithuanian Historical Materials, p. 3.) 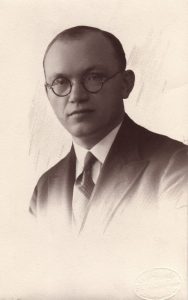 Klimas studied in Liudvinavas and later in Kalvarija two-grade primary school. In 1901, he studied in the Marijampolė gymnasium. In 1908, together with other students, he published a secret student newspaper called Mokinių draugas (Students’ Friend). After the gendarmes tracked him down, the lawsuit was filled for Klimas. The future signatory was expelled from the gymnasium, but later acquitted and allowed to return. He graduated from the gymnasium in 1910. Four years later, Klimas graduated from law studies, in the Moscow Imperial University. He was an active contributor to the liberal newspaper Aušrinė, signing articles under the pseudonym Vabalėlis.

In 1915, during the German occupation, the future signatory took part in all of the most important events of that time. He was imprisoned by the Germans in 1916, but regained his freedom after a few months, and resumed his political activities. At the Lithuanian Conference held on 18-22 September 1917, Klimas was elected to the Lithuanian Council, became its secretary and later secretary-general, and signed the Act of Independence on 16 February 1918.

From November 1918, the signatory worked in the Ministry of Foreign Affairs, and from 1919 to 1923 he was the Vice-Minister. In 1920, he served as secretary during the peace negotiations with Russia, and in 1921, in the framework of the League of Nations, he negotiated with Poland together with other members of the Lithuanian delegation. In February 1922, he was a member of the delegation of the Lithuanian government to the Genoa Conference, drafting documents on the eastern border of Lithuania.

Klimas combined his political activities with publishing and teaching. In 1917-1918, he was the editor of Lietuvos Aidas. Although the newspaper was registered under the name of Antanas Smetona and he was the one who wrote the First Word, the real editor was Petras Klimas, who shaped its direction. In 1920-1923, the signatory taught at the Higher Education courses and the University of Lithuania.

From 1920 to 1923 he taught at the Higher Education courses and the University of Lithuania. 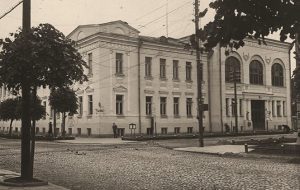 On 15 September 1923, Klimas became Envoy Extraordinary and Plenipotentiary Minister to Italy. On 20 May 1925, he was designated Envoy Extraordinary and Plenipotentiary Minister to France. On 17 July 1925 he was accredited as the first Lithuanian envoy to France. Klimas has also been accredited in Belgium, Luxembourg, Spain and Portugal.

On 5 and 11 October 1939, Klimas took part in the meetings of the Lithuanian, Latvian and Estonian envoys in Paris on the policy of the USSR in the Baltic States. As the German army approached Paris, he alongside the French government retreated to Bordeaux and later to Vichy. He only took with him a suitcase containing documents and letters by Juozas Tumas-Vaižgantas. On 4 August 1940, when the Baltic States were incorporated into the Soviet Union, the signatory handed a note to the French Foreign Minister asking him not to recognise the occupation of Lithuania.

In the spring of 1941, the family of Klimas settled in Grasse, Southern France. On 18 September 1943, Klimas was arrested by the Gestapo, and imprisoned for several months in various prisons in France, Belgium, Germany and Poland, he was transported in wagons and being starved. On 19 March 1944, exhausted by hunger, Klimas was taken to Kaunas prison and released.

He settled in Kaunas in Vaižganto Street, in the house of his sister-in-law Barbora Lesauskienė (Mėginaitė). When the Red Army was approaching, he remained in Lithuania. For eight months he worked on the farm of Prof. Tadas Ivanauskas, where he was arrested by the NKVD on 19 September 1945. He was imprisoned in the Chelyabinsk region, working as a digger and carpenter.

After his health worsened, he returned to Lithuania on 1 January 1954. In Kaunas, he continued living with Lesauskienė.  Plagued by illnesses and difficult past experiences, longing for his family in Paris, he did not break down spiritually and started writing again. 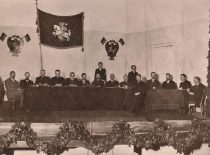 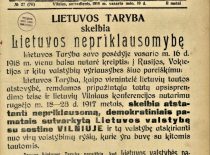 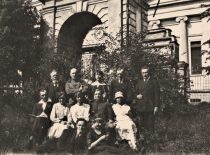 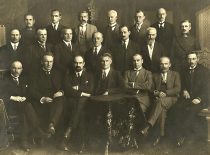 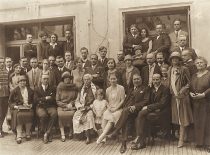 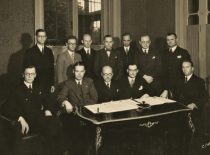 On 7 July 1921, Klimas started a family by marrying Bronislava Mėginaitė, born in the family of the writer Juozas Tumas-Vaižgantas. She is the daughter of the priest’s favourite sister, Severija. During the First World War, the priest, who lived with his nieces in St Petersburg, helped them to get an education, and thanks to him Bronislava graduated and worked at the Voronezh Lithuanian gymnasium.

Later, Mėginaitė worked at the Ministry of Foreign Affairs, first as a head of the archives and later as a cryptographer. In 1920, she went to Geneva, to the Assembly of the League of Nations, as a cryptographer in the delegation led by Augustinas Voldemaras. Klimas also joined this delegation. A year later, Bronislava and Petras got married, with Juozas Tumas-Vaižgantas conducting the ceremony.  They had a daughter, Eglė, and a son, Petras.

Eglė grew up and studied in Paris. Married to French diplomat René Fourier Ruelle, she and her husband spent many years in diplomatic missions in Rome, Tunis, New York, Tokyo, Brussels and elsewhere. Petras studied mathematics and physics at the Universities of Strasbourg and the Sorbonne, and worked for almost 20 years as Secretary General of the School of Translators at the Sorbonne University. After the restoration of Lithuania’s independence, he took up diplomatic work. At the beginning of 1992, he was appointed Second Secretary-Consul at the Embassy of the Republic of Lithuania in France, and a couple of years later he became the First Secretary-Consul. He held this position until May 1995. 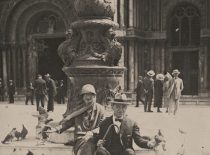 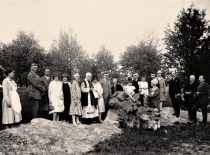 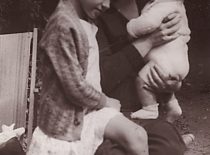 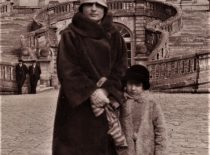 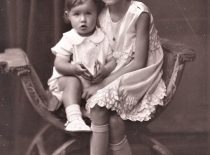 Books of Klimas in the KTU library 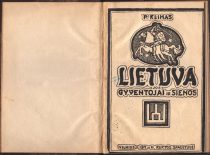 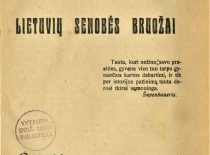 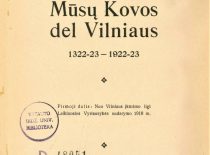 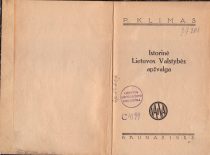 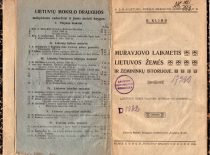 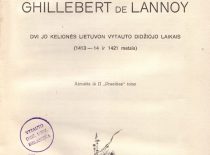 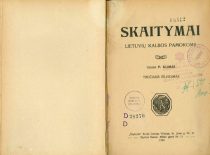 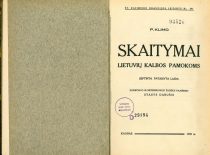 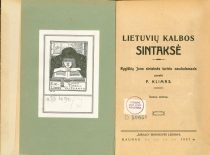 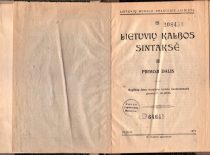 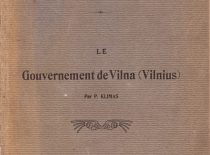 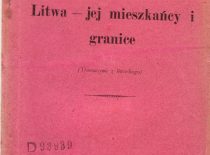 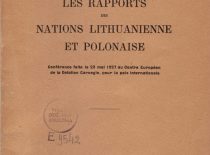 The library holds several books from the signatory’s personal library (with his signature): Kristaus Problema by Pranas Dovydaitis (1914), Vergai ir Dikiai by Vydūnas (1919), etc. There are also books with dedications by Klimas to Brother Sergijus, Uncle, Good Uncle Canon Juozas Tumas and others. In Zenonas Ivinskis’ book The Sun-Šiauliai Battles of 1236 and Their Significance (1936), there is a dedication: D. G. To Mr. Minister Klimas, as a token of respect and gratitude. 1944.V.2. Author, in the book of Vytautas Steponaitis Military press production 1919–1928 m. – Hon. Sir Klimas. In Kaunas 1932.XI.2, and in Vladislovas Syrokomlė book Nemunas: from river’s sources to estuaries, which was translated by Kazimieras Bizauskas, – translator’s dedication to Klimas. 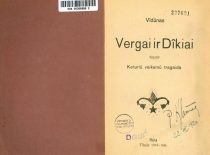 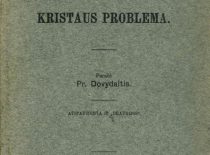 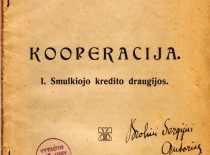 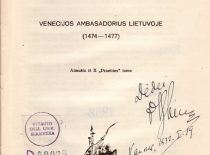