JUOZAS TUMAS-VAIŽGANTAS AND THE UNIVERSITY

The exhibition presents publications from the “University” collection and documents from the iconography set that are stored in the Stock of Rare Books, revealing the social and pedagogical activities of Juozas Tumas.

After graduating from the Gymnasium, the question of whether to enter a seminary or a university arose. His parents wanted to see their son become a priest, and his sisters were calling him “our little priest” even from an early age. Poor health helped to make the decision. In the words of Tumas, “I chose the seminary not exactly because my parents and sisters wanted me to do so, but because I was preparing to die, and dying as a cleric, for whom so many of my friends were praying, seemed to be the most redeeming thing” (Vaižgantas, 1929, p. 267).

In 1888 Tumas entered the Kaunas Samogitian Priest Seminary, from which he graduated in 1893. On 28 November of the same year, Samogitian Bishop Antanas Baranauskas ordained Tumas a priest at Kaunas Cathedral. He held his first Mass in the Svedasai church which was his native parish. 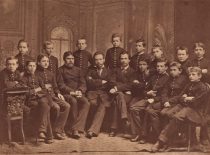 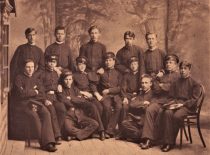 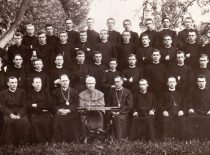 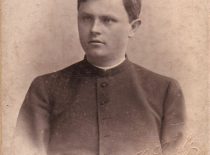 From 1893 to 1895 Tumas was a priest in Mintauja, from 1895 to 1906 and from 1911 to 1914 in various other parishes of Lithuania. In 1896 he started publishing the magazine “Tėvynės sargas” (Homeland Guardian) and edited the newspaper “Žinyčia” (Treasury of Knowledge) from 1900 to 1902. In 1905 he was one of the organisers of the Great Seimas of Vilnius; from 1906 to 1911 he lived in Vilnius, where he worked in the editorial offices of the daily newspaper “Vilniaus žinios” (Vilnius News) and the newspaper “Viltis” (Hope), and took part in the activities of various scientific and cultural societies. In 1911, Tumas was appointed to be a pastor of Laižuva, and in the same year he went to America for three months on the matters of the “Saulės” (Sun’s) society. After he returned, he wrote a book about emigrant life. In 1914, Tumas was dismissed from his position as pastor of Laižuva and went to Riga, where he worked in the editorial office of the “Riga Sound”. From 1915 he took part in the “Lithuanian Society for the Support of Victims of War”, founded in Petrograd. In 1918 he returned to Vilnius, took part in cultural activities, and edited “Lietuvos Aidas” (Echo of Lithuania). In 1919 he started publishing the newspaper “Independent Lithuania”. In 1920, Tumas moved to Kaunas and was appointed rector of Vytautas the Great Church. During the same year, he edited the newspaper “Tauta” (Nation), and from 1921 to 1929 edited the continuous publication “Mūsų senovė” (Our Antiquity). In 1921, he was elected Chairman of the Central Board of the “Society for the Beautification of Lithuania”, founded by Lithuanian intellectuals of Kaunas. Juozas Tumas published journalistic articles from 1890, and fiction from 1897. 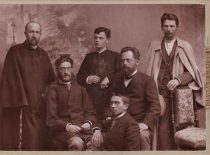 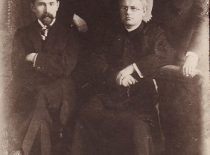 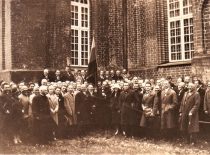 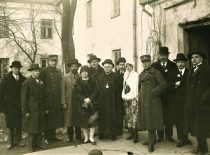 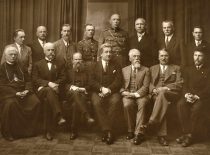 Juozas Tumas-Vaižgantas’ Pedagogical Activities at the University of Lithuania: 1922-1932

“The Faculty of Humanities was organised from the Faculty of Social Sciences, which had been in existence since 1922 II. 16; its core members were Mykolas Biržiška, Kazys Būga, Jonas Jablonskis, Vincas Krėvė-Mickevičius, Jonas Yčas. The faculty began operating in the autumn semester of 1922.” (University of Lithuania, 1927, p. 199) “The regulations of the Faculty established four departments of the Faculty of Humanities: linguistics, literature, history and philosophy. They were active until 1924, and on 1924 VI. 11 the faculty decided to keep 3 departments: philology, history and pedagogy-philosophy.”

From 1921 to 1922 Tumas taught at the Higher Military Officers’ Courses. The “lively and interesting” Lithuanian literature lectures attracted many listeners. Prof. Vincas Krėvė-Mickevičius came to listen to one of his lectures on Vienuolis-Žukauskas. He enjoyed the lecture of Priest Tumas as well. “Probably while listening to that lecture, Prof. Krėvė-Mickevičius had the idea to invite Priest Tumas to be the lecturer at the Faculty of Humanities” (Merkelis, 1989, p. 330).

On 8 September 1922, on the birthday of Priest Tumas, Prof. Krėvė-Mickevičius visited him. “After a conversation with his host about Lithuanian literature and science, Prof. Krėvė-Mickevičius offered him to hand over a statement to the Dean of the Faculty of Humanities, Mykolas Biržiška, that he (Tumas) would like to teach Lithuanian literature to the students” (Merkelis, 1989, p. 331). On 25 September Tumas and Prof. Krėvė-Mickevičius went to the University to see the Rector, Prof. Jonas Šimkus. The Rector accepted the new lecturer and “appointed the first public lecture for the following Sunday in the great hall of the University, ordered it to be registered immediately and published in the “Lietuva” (Lithuania) daily newspaper” (Ten pat, p. 331). 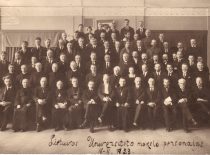 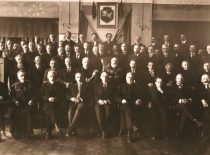 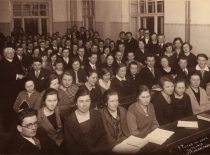 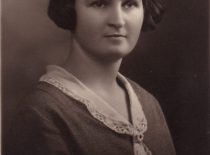 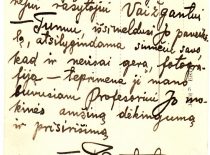 On 5 October 1922, Priest Tumas gave an introductory lecture on Maironis in the Great Hall of the University. “After the lecture, congratulations poured in from colleagues and relatives. Congratulations were given by Prof. Vincas Krėvė-Mickevičius, Prof. Pranciškus Būčys, Prof. Mečislovas Reinys and others.” The Dean of the Faculty of Theology-Philosophy Būčys liked the lecture so much that he promised to send his own students to the lectures of the new lecturer until the Assoc. Prof. Vincas Mykolaitis return next year, because he had gone abroad to deepen his knowledge of literary sciences (Merkelis, 1989, p. 334).

The Faculty of Humanities wanted to publish Assoc. Prof. Tumas’ lecture material in separate publications and encouraged the author to prepare it for print, but Tumas preferred periodicals, so initially the lecture material was published in periodicals: „Lietuva, „Krivulė“, „Rytas“, „Naujoje Vaidilutė“, etc., and only later in separate books. 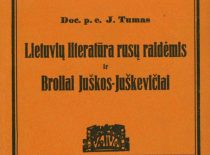 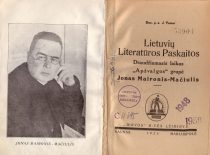 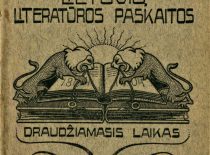 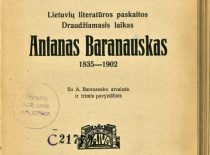 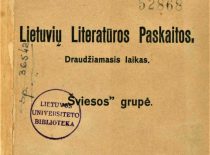 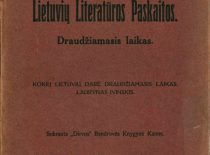 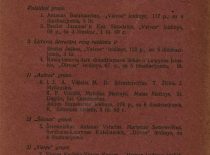