EX-LIBRISES IN RARE BOOKS OF THE KTU LIBRARY

This exhibition focuses on one of the book marks, the ex-libris. Ex-libris (Latin: exlibris – from books) is a book ownership mark, in a form of a small printed slip of paper affixed to the inside of a cover, frontispiece, title page, etc. This piece of paper is usually artistically decorated with the book owner’s name, initials, coat of arms, the name of the institution or a drawing printed on it.

The first ex-librises were created in Western Europe at the end of the 15th century, they started spreading in the 16th and 17th centuries, and became the most popular way of marking your books in the 18th and 19th centuries. The first ex-librises with inscriptions in Lithuanian were created in Lithuania Minor around 1866-1868. In Lithuania, after the abolition of the press ban, the first mark was created for the writer, educator and public figure Juozas Tumas-Vaižgantas.

Ex-librises were collectible items. In the 19th century, the largest collection (over 1500 pieces) was owned by Counts Benedykt and Rožė Tyszkiewiczowie, who lived in Raudondvaris.

In Lithuania, book marks began to be studied only at the beginning of the 20th century. In 1926, Paulius Galaunė, a graphic artist, art historian and historian of book art, published a book “Ex-libris in Lithuania (XVI-XX centuries)”. The most significant works on this topic are the 1984 monograph “Lithuanian Book Marks: 1518-1918” by the painter and graphic artist Vincas Kisarauskas and the 1991 study “Lithuanian Ex-libris”. 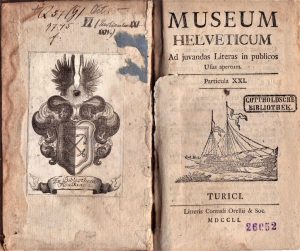 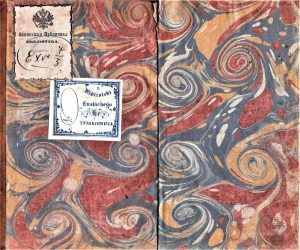 A personal library is a collection of books (sometimes includes manuscripts) assembled according to the needs of an individual, family or institution. These libraries reveal both the personal characteristics of bibliophiles and their areas of interest.

Since the establishment of the KTU Library in 1923, the Stock of Rare Books has acquired unique books, manuscripts, cartographic or iconographic documents, which have come to the Library as part of the collections of individuals or families. Currently, the libraries of Vaclovas Biržiška, Juozas Tumas-Vaižgantas, Kazimieras Būga, Antanas Smetona, Adalbertas Becenbergeris, Augustas Robertas Niemis, Petras Leonas, Stanislovas Didžiulis, Broel-Pliateriai, Kossakowski, Tyszkiewicz , Oginski, Karpis, and other family libraries are distinguished in the stock, but only a few of the largest have been reviewed.

LIBRARY OF ADALBERT BEZZENBERGER (1851–1922)
After the establishment of the Library, the largest part of the stock consisted of the personal library of the German linguist, archaeologist, ethnographer, pioneer of academic Baltic studies, professor of the University of Königsberg, honorary professor of the University of Lithuania, Adalbert Bezzenberger, which was obtained from of the Central State Bookstore. The collection consisted of publications on Baltic linguistics, cultural history, etc., with a special place given to books by Simonas Daukantas, Antanas Baranauskas, Kazimieras Būga, Jonas Basanavičius, etc. (4608 copies in total).
Some of the books in the collection have an ex-libris pasted on them, which was specially created for Bezzenberger in 1923 by Paulius Galaunė.

LIBRARY OF VACLOVAS BIRŽIŠKA (1884–1956)
In 1944, the personal library of Vaclovas Biržiška, a lawyer, cultural historian, professor of the University of Lithuania, dean of the Faculty of Law, founder of the Library of the University of Lithuania, and its director for many years, was handed over to the Library. The collection consisted of books on bibliography, history of the press, pedagogy, law, history, etc. (over 2000 copies). A special place in the collection was occupied by rare 16th-18th century books.
The books of the Biržiška Library were marked with two ex-librises.

LIBRARY OF STANISLOVAS DIDŽIULIS (1850–1927)
In 1930, from the personal library of the cultural and public figure, bibliographer Stanislovas Didžiulis, the University of Lithuania received over 300 books, which were added to the Department of Lithuanian Studies. These books were selected by Biržiška from a list of 828 prints offered by Didžiulis.

Didžiulis spent many years building up his personal library, which he divided into two parts during the years of the Press Prohibition: the legal and the secret part (this part consisted of about 800 Lithuanian books). He provided bibliographical knowledge to Eduardas Volteris, Silvestras Baltramaitis, Mauricijus Stankevičius and others, and collaborated in “Aušra” (Eng. Dawn) newspaper. The books collected by the Didžiulis were used by Mečislovas Davainis-Silvestraitis, Jonas Jablonskis, Jonas Basanavičius and others.

LIBRARY OF PAULIUS GALAUNĖ (1890–1988)
The collection of the Lithuanian art historian and critic, painter, graphic artist, pioneer of Lithuanian professional museology is distinguished and continuously updated according to the ex-librises or the inscription “Ex Libris Paulius Galaunė” that are found in books, as well as to the entries in the Library’s inventory books. Today, the collection of Galaunė contains 29 books, including prints in Polish, Russian, French and German from the 19th and the first half of the 20th centuries, as well as a few iconographic documents. These prints are marked with four book marks: three ex-librises, made by Galaunė, and an inscription.

LIBRARY OF VYTAUTAS IR ALGIRDAS GINTILOS
Vytautas ir Algirdas Gintilos’ asmeniniame rinkinyje buvo sukaupta 1000 įvairiakalbių leidinių apie Lietuvą. The largest part of the Gintilos’ collection consisted of books published in Poland in the 19th and 20th centuries, but there was also a history of Lithuania written in Chinese in China.
In 1939, Dr. Vytautas Gintila, who lived in Bydgoszcz, returned to Lithuania, and donated the before-mentioned collection to the Library. Today, more than 400 books of the Gintilos Library with the ex-libris of Vytautas and Algirdas Gintilos have survived.

LIBRARY OF KOSSAKOWSKIS
Counts Kossakowskis had a large and valuable library at Vaitkuškis Manor. In 1760, the Governor of Vitebsk, Michał Kossakowski, bought the Vaitkuškis manor. At the beginning of the 20th century, the manor’s library consisted of about 12,000 books and manuscripts in various languages. Around 1842, the Polish-Lithuanian collector, writer, painter and Russian diplomat Stanisław Feliks Kossakowski (1795-1872) lived in his inherited manors in Lithuania, amassing a collection of works of art and books in Vaitkuškis (where his residence resides). Major part of this library went to the Central State Bookstore, from which several hundred books were transferred to the Library in 1935.
The collection contained important publications in Lithuanian Studies. It is distinguished by the variety of bookmarks: 3 super-exlibrises, 3 ex-librises and 6 book imprints, created from 18th to 20th centuries. The Kossakowski Library also includes books with an ex-libris by Michał Stanisław Kossakowski (1883-1962). Michał Kossakowski was an estate owner of Lyduokės, figure of Polish estate owners in Vilnius region, inter-war Polish diplomat.

LIBRARY OF ALGIRDAS MOŠINSKIS (1905–1991)
Algirdas Mošinskis was a cultural and public figure, engineer, architect and bibliophile who lived in abroad for many years. Mošinskis’ designs were used to build private residential houses, post offices, railway stations, hospitals, etc. in Lithuania. From 1941 to 1943 he taught at the Kaunas Institute of Applied and Decorative Arts.
Mošinskis started collecting rare books while he was still a student. He accumulated a collection of 16th-17th century maps, 17th-19th century books on Lithuanian studies, small prints, and manuscripts.
From Mošinskis’ personal collection, the Library acquired more than 700 publications, which are marked with two ex-librises created in the first half of the 20th century.

LIBRARY OF ANTANAS SMETONA (1874–1844)
Antanas Smetona, a politician and president of the Republic of Lithuania during the interwar period, taught ethics, ancient philosophy, and stylistics of the Lithuanian language at the University of Lithuania in 1923-1926.In 1932, he was awarded an honorary doctorate from Vytautas Magnus University. Smetona translated several classical works from Greek, was considered one of the best stylists of the Lithuanian language, published original and translated works on philosophy and other sciences, collaborated with “Vilniaus žinios” (Vilnius News), edited “Lietuvos ūkininkas” (Lithuanian Farmer), and published “Viltis” (Hope), etc.
In 1941, the memorial objects, furniture and other inventory of the Presidential Palace were handed over to the then Kaunas State Museum of Culture (now the Mikalojus Konstantinas Čiurlionis National Art Museum). The majority of the library went to Kaunas University Library, 913 items were received in 1941.

LIBRARY OF TYSZKIEWICZS
In 1930, Walter Fischer, the owner of the German bookshop in Kaunas, solemnly donated a part of the Raudondvaris library of the Counts Tyszkiewiczs to the University (7874 books). The collection consisted of 15th and 19th century prints published in Latin, French and Polish. The Library currently holds over 800 copies, including a book of poems by Caius Valerius Catullus from the earliest period of printing (the 15th century), “Poems…” (“Carmina…”, 1475), and a fragment of the “Book of Chronicles” (“Liber chronicarum”, 1493) on Lithuania by Hartmann Schedel.
The Tyszkiewicz Library also includes books by Count Eustachy Tyszkiewicz (1814-1873), descended from the Lahoysk branch of Tyszkiewicz family. Eustachy Tyszkiewicz was a historian, archaeologist, collector, and founder of the Vilnius Antiquities Museum.

LIBRARY OF JUOZAS TUMAS-VAIŽGANTAS
In 1933, Juozas Tumas-Vaižgantas, a writer, priest, editor of the publications “Tauta” (Nation) and “Mūsų senovė” (Our Antiquity), and lecturer in the history of Lithuanian literature at Kaunas University, bequeathed to the Library his personal collection of 1,879 copies of his books and serials. The most important publications in this collection are from the humanity field (linguistics, history, philosophy, etc.), which he has been collecting for several decades. The books are distinguished by dedications by authors and translators. Two ex-librises and a stamp can be found in the library. Almost the entire collection of prints collected by Vaižgantas has been preserved to this day. 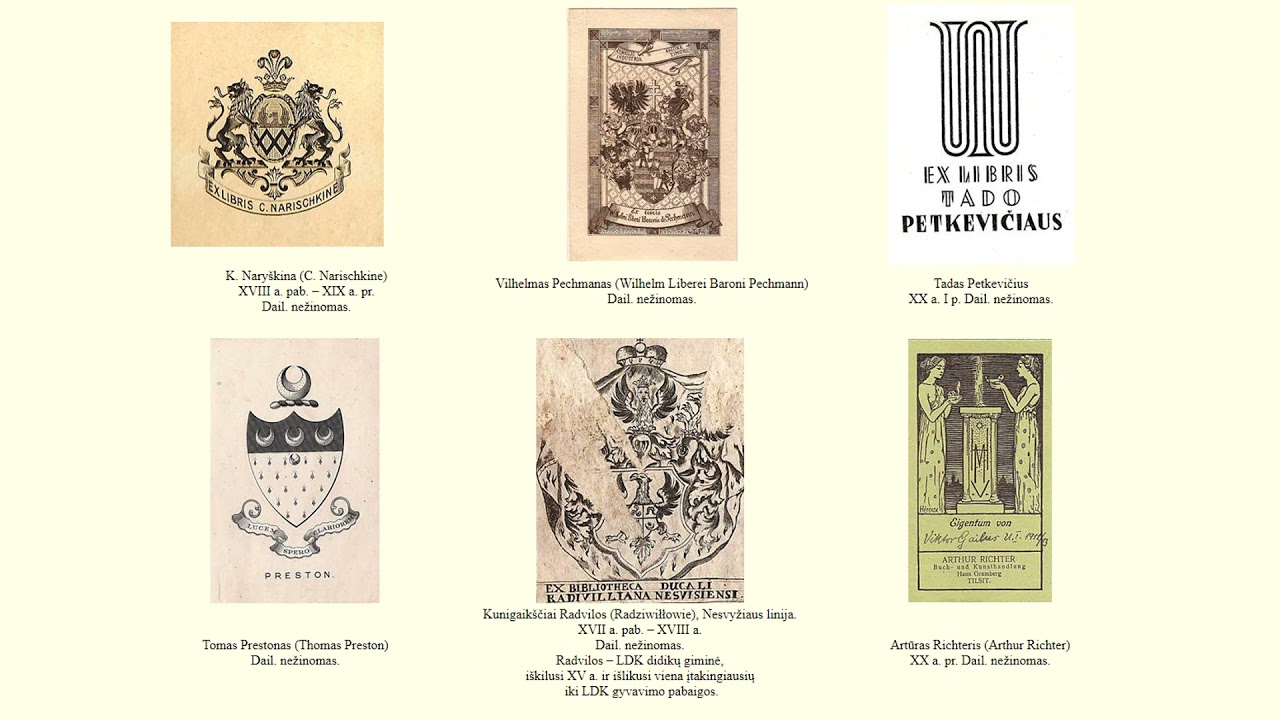 The exhibition was organised by the Chief Librarian of the Rare Books Group Dr. Edita Korzonaitė, edita.korzonaite@ktu.lt, 300 658.