The year 2021 was declared by the Lithuanian Parliament as the year of the cleric, doctor and scholar Jurgis Ambraziejus Pabrėža (1771-1849).

Writer, literature historian, lecturer at the University of Lithuania, Priest Juozas Tumas-Vaižgantas wrote: “I argued with Kazimieras Būga about how the surname Pabreža should be written: with ė or e. He insisted to use ė. I had this reasoning. People from Samogitia and Telšiai regions pronounce ė, like ie: gėda – gieda (Eng. shame). So if Pabreža would be written with ė, it would be pronounced as Pabrieža; however, they pronounce this vowel of the surname in a “hard way”, just like with Russian ə: Pabrəža, just like Səda. If we write Seda without the dot, we should do the same with Pabreža too and write it without the dot. However, Būga did not recognice my reasoning as decisive, so I had to give in and start writing with ė” (Vaižgantas, 1929, p. 59). According to Vaclovas Biržiška, those who wrote about Jurgis Pabrėža in the past, “usually regarded him as a nobleman and even as having the mark of a Raven (Polish “Ślepowron” coat of arms), but neither the Lithuanian Heraldry, nor the heraldic lists of Lithuania do not know of any Lithuanian noblemen as Pabrėžos, but there were a lot people with Pabrėžos surname among the peasants in the 17th century, in the present-day borders of the Kretinga district” (Biržiška, 1963, p. 306).

After studying at the parish school in Kretinga from 1785 to 1786, Jurgis Pabrėža enrolled in the Franciscan Gymnasium in Kretinga, where he graduated in 1792. The following year, he went to Vilnius and started studies at the Faculty of Medicine of the Grand Duchy of Lithuania’s Higher Education School (now Vilnius University), where he studied medicine, botany, physics, chemistry, law, and theology, learned eight languages, but dropped out in 1794.

Pabrėža’s life was linked to the Franciscans from his childhood: his uncle Aleksandras Pabrėža was a Franciscan, so he also wanted to join a monastery himself. In 1816, Pabrėža joined the Third Franciscan Order in Kretinga, and a year later he took his perpetual vows and received the name Ambraziejus. According to Biržiška, “before joining the monastery, he got the agreement of his future supervisors to not move him anywhere from Kretinga, and a permission to leave the monastery to preach sermons or to gather herbs” (Biržiška, 1963, p. 308–309).

From 1817 to 1821, Pabrėža taught Latin, natural sciences, geography and religion at the Kretinga Bernardine School, and served as the chaplain of the gymnasium. In 1821, he was dismissed as a teacher and appointed to be the preacher of the monastery. Biržiška tends to doubt that Father Ambraziejus was teaching only until 1821. According to him, other biographers claim that Pabrėža was a teacher until 1839, “until the authorities took the school away from the monastery (according to Valančius, the school was closed in 1836 VII 17)” (Biržiška, 1963, p. 309).

Father Ambraziejus travelled extensively, collecting historical and ethnographical material, as well as botanical specimens. He was known as a great preacher. His speeches were based not only on texts from the Bible and famous preachers, but also on historical and ethnographical facts. He maintained contacts with Bishop Motiejus Valančius, Priest Jonas Krizostomas Gintila and other intellectuals of the late 18th and early 19th centuries.

Father Ambraziejus had a special relationship with the historian Simonas Daukantas, who was the first to write about the history of Lithuania in Lithuanian language. It is believed that Daukantas met Pabrėža in 1834, when he came to Samogitia for a holiday, and maintained friendly relations until the priest’s death. They were linked by their work, and in addition, Pabrėža distributed the historian’s books, took care of his relatives, etc. They only had dissagreements over the spelling: “Pabrėža had his own spelling system, different than the one of Daukantas, and he adhered to it in all his Samogitian writings” (Biržiška, 1963, p. 309). 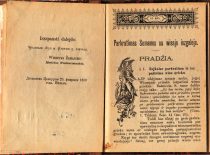 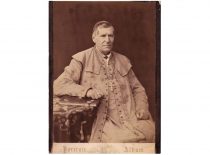 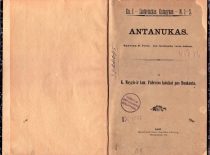 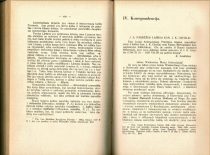 THE WRITTEN LEGACY OF PABRĖŽA

In the Mačius’ article “Lithuania’s First Botanists and Plant Explorers”, alongside the founder of the VU Botanical Garden, the lecturer of the VU Department of Natural Sciences, Prof. Jean Emanuel Gilibert, the head of the VU Department of Natural Sciences, and lecturer, Prof. Stanislovas Bonifacas Jundzila, as well as other famous persons, Pabrėža is also mentioned as someone “who was a great admirer and researcher of plants. He spent all his free time among plants, collecting and studying them” (Mačius, 1938, p. 6–11). At first, Father Ambraziejus only collected and studied medicinal plants, but later he also began to document his research. He was greatly influenced in 1828, when he started communicating with botanist, pharmacologist, and VU lecturer Prof. Johann Friedrich Wolfgang, who suggested that unnamed plants should be named after Lithuanian pagan deities.

Father Ambraziejus bequeathed a large herbarium. As Prof. Constantin von Regel, the founder and head of the Botanical Garden and head of the Botany Department at Vytautas Magnus University, wrote in 1937, “Priest Ambraziejus Pabrėža left not just a whole series of manuscripts as his legacy: he also bequeathed a large herbarium, one part of which is now in the Botanical Museum of the VMU, and the other part was taken to Russia during the war, and probably perished there. That herbarium has been processed scientifically. Prof. Hryniewiecki (in Warsaw) and I made lists of the plants in that herbarium with explanations. It turns out that it contains a number of rarer plants, some of which have not been found in Lithuania since the death of Pabrėža. Pabrėža shows his deep knowledge of botany here as well” (Rėgelis, 1937, p. 5). 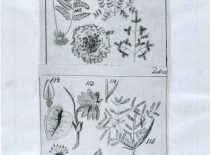 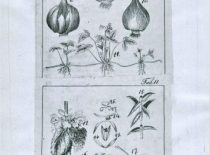 Father Ambraziejus treated patients who came from all over Samogitia. Seventeen of his manuscripts had survived, where he describes diseases, their symptoms and treatment. In 1927, Antanas Salys wrote about the manuscripts of Pabrėža: “we can clearly see that Priest Pabrėža was devoted to three jobs of his: the care of people’s spiritual matters (= spiritual books), their medical treatment (= medical books), and the study of flora (= botanical manuscripts) (Salys, 1927, p. 16).

Pabrėža wrote about 50 works on botany, including “Dictionarum Botanicum Latino Samogiticum” (Latin Samogitian Dictionary of Botany, written around 1829) and the encyclopaedic publication “Botanika arba Taislius auguminis” (Botany or the System of Plants), written between 1835 and 1843, in which he described 643 plants. Father Ambraziejus gathered the money for the publication himself, but the manuscript was never published.

After the death of Father Ambraziejus, all his manuscripts remained in the monastery of Kretinga, but were later spread among Lithuanian libraries. The manuscript “Tayslos augiyynis koremy taalpynas augimys…” (1835-1843) is currently preserved in the Martynas Mažvydas National Library of Lithuania, and in 2008 it was included in the UNESCO Memory of the World Programme Lithuanian National Register as a documentary heritage object of national significance (No. 32).

In 1900, the publication of the manuscript was the concern of the press worker and public figure Priest Antanas Milukas, who went to live abroad in USA. In the same year, part of the manuscript was published as a separate issue of the journal “Dirvos” (Eng. Soils, 1898-1906), “Botanika arba Taislius Auguminis” (Eng. Botany or the System of Plants). The Institute of Botany of the Nature Research Centre, the Institute of the Lithuanian Language and the National Martynas Mažvydas Library have published a three-volume set “Taislius augyminis” (System of Plants). 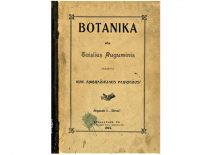 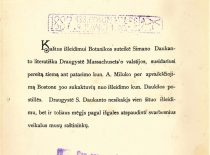 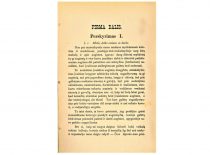 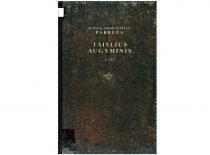 THE FATE OF PABRĖŽA’S PERSONAL LIBRARY

Father Ambraziejus had accumulated a library of more than 400 publications on botany, medicine, geography, chemistry, theology, philosophy and other scientific subjects. According to Prof. Arvydas Pacevičius, Pabrėža started collecting books as early as 1796-1806: some books were given to him as gifts, others were bought. After the death of Father Ambraziejus, most of the library was handed over to the Kretinga Bernardine Monastery, where it remained until 1940 (Pacevičius, 1997, p. 279).

According to the book entries of KTU Library Inventory, 224 books belonging to J. Pabrėža were received from the Kretinga Monastery on 7 May 1942. From 1961 to 1968, most of them were transferred to the public libraries of Vilnius University and Kaunas County. In the article “On Marginalia as a Source for the History of the Book Trade” by the scholar Dr. Alma Braziūnienė, information can be found that a part of the personal library of Pabrėža “was located at Kaunas Vytautas Magnus University before the Second World War. After the war, the library was scattered when it was being transported to the Vilnius University Library, and only around 1966, the library staff <…> began to retrieve the books of Pabrėža from the general collection. Now 101 books are retrieved, while there used to be several hundreds of them in Kaunas” (Braziūnienė, 1995, p. 17–18).

In 2020, the personal library of Jurgis Ambraziejus Pabrėža was formed in the Stock of Rare Books of the KTU Library (all books are marked with Pb ciphers): 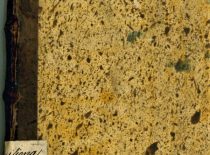 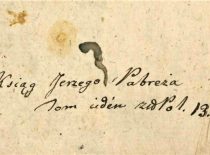 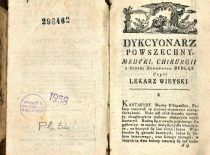 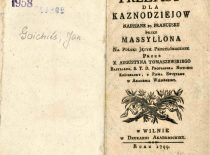