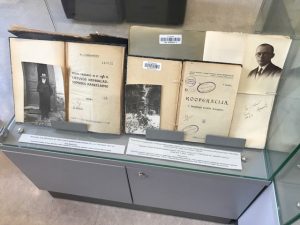 In rare books department are preserved fragments of the libraries that had belonged to the first Lithuanian president Antanas Smetona and Jurgis Šaulys who was diplomat, doctor of philosophy and representative of publishing house. These collections are exceptional in terms of variety of languages and reveals a broad spectrum of signatories’ interests.

Among the books that had belonged to A. Smetonas was found owner’s record „A. Smetano” as well as dedications to the President of the Republic of Lithuania. One of these records was written by Czechoslovakia consular in Lithuania, professor Jaroslav Galia the record is inscribed in the book “Baroque architecture of Prague“. Almost all the books that belonged to J. Šaulys , a person who wrote the Act the Independence, are marked with the owner‘s signature.

In the exhibition are presented books written by signatories as well as publications with their dedications or dedications for them.

Exhibition will be open until 20 th of April. We kindly invite to visit this exhibition.

From the 3rd of August, readers in the library must wear respiratory protection

On the 6th of July library will be closed

On the 6th of July library will be closed

2 months ago
We are using cookies to provide statistics that help us give you the best experience of our site. You can find out more or switch them off if you prefer. However, by continuing to use the site without changing settings, you are agreeing to our use of cookies.
I agree